Raw Lavitol is the substance that is represented by mix of flavonoids (Dihydroquercetin and other relative flavonoids) and has the antioxidative properties. The content of Dihydroquercetin (taxifolin) ranges from 70% to 88%. Ametis JSC produces Raw Lavitol on the grounds of Technical Requirements TY 2455−001−48375962−03. Raw Lavitol could be used as the main compound of plant growth stimulants.

Moreover the purification of Raw Lavitol allows getting Dihydroquercetin with higher purity.

The chemical composition of the Larch oil is complex and various. It consists of the blend of terpene hydrocarbons, resin acids, phytosterols, tocopherols, diterpene and fatty acids, dihydroquercetin.

Larch oil has high antiviral and biological activity; shows wound healing, antimicrobic and anti-burning effect. Besides, larch oil “Lavitol” is an effective antioxidant because of containing up to 20 % of dihydroquercetin.

The resin softens when heated

Due to the unique chemical composition larch resin has antioxidant, antiseptic, capillary-protective, anti-inflammatory, antimicrobial, wound healing properties, it is successfully used in cosmetic and medical industries. Larch resin has the strong effect on the healing of posttraumatic wounds and burns, soft tissue bruise as well as on uninflammed trophic wounds. Larch resin is recommended as the basic compound of hot compresses and ointments intended for prevention of upper airways and joint diseases. 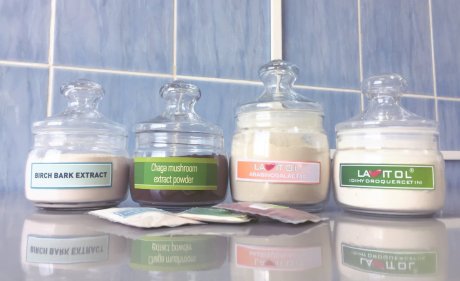